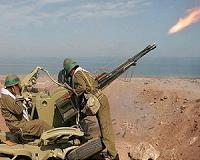 Iran’s Revolutionary Guards said they lost one soldier and killed a number of “anti-revolutionaries” in clashes Friday near the western border with Iraq.

A Guards border patrol “encountered and fought with an anti-revolutionary group in Sarvabad,” in Kurdistan province, the semi-official Fars news agency reported.

The report said an unspecified number of the “anti-revolutionaries were killed and wounded and a considerable amount of their weapons and ammunition was destroyed”.

One of the Guards was “wounded and died en route to hospital”, the agency added.

It did not say whether or not the combatants were from Kurdish opposition or jihadist groups, both of which have previously entered Iran from neighbouring Iraq.

For much of the past 40 years, Iran has been battling militant Kurdish opposition groups who use bases in Iraq’s Kurdistan to stage attacks against the Guards and state institutions inside the Islamic republic.

Earlier this month the Guards launched deadly strikes against militant Kurdish opposition groups across the border.

A Guards statement issued on July 12 said the targeted groups had tried to use “villagers as human shields”.

Rocket fire on farmland killed a civilian woman and two members of her family, Ehsan Shalabi, mayor of Sideka, north of Iraq’s Arbil, told AFP at the time.

Iran’s oldest Kurdish separatist group, the KDPI was banned after the 1979 Islamic revolution and appeared to resume operations in 2016 after a long truce.

In September 2018 the Guards launched a missile attack against the party’s headquarters in Koysinjaq, around 60 kilometres (35 miles) east of Arbil.

The KDPI said the strike killed 15 and …read more