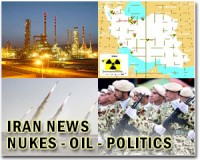 London (AFP) July 25, 2019 –
Iran’s detention of a UK-flagged tanker presents new British Prime Minister Boris Johnson with an early leadership test — does he side with the US “maximum pressure” campaign against the Islamic republic or back EU efforts to salvage its nuclear pact.

Which way Johnson leans could set the tone for a complex agenda that includes withdrawing from the European Union and establishing much closer trade relations with the United States.

Some US commentators even see this is a make-or-break moment that might vindicate President Donald Trump’s decision to abandon the Iran nuclear deal and seek one curbing Tehran’s broader activities in the Middle East as a whole.

“Johnson could simply announce that the UK is joining America’s maximum-pressure campaign and calls for a new (Iran) deal,” the editorial board of The Wall Street Journal wrote.

“The rest of Europe would likely have no choice but to join its Anglophone partners — and finally present a united front.”

Such an operation could expose Britain’s reliance on EU allies at the very same time that Johnson is determined to yank his country out of the bloc on October 31.

Johnson’s other option is to sign Britain up to a US-led alliance outlined by Trump’s administration at NATO last month.

That decision could boost London’s chances of reviving stalled efforts to strike a post-Brexit trade deal with Washington.

The downside risk is that British warships could be caught up in more aggressive US rules of engagement that London currently does not support.

Johnson’s spokesman on Thursday condemned Iran’s seizure of the tanker as an “illegal act” and said the government was focused on securing the release of the Stena Impero and its crew.