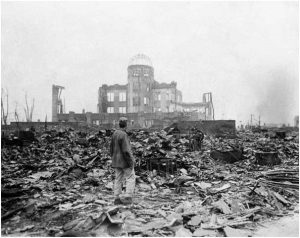 From the ashes of a tragedy that wiped out almost 90% of the city of Hiroshima on 5 August 1945, an institute called the Hiroshima Peacebuilders Center (HPC) rose like a phoenix of hope that is pioneering the creation of a global pool of peacebuilders. It is driven by the 2030 Agenda for Sustainable Development declaration that “there can be no sustainable development without peace and no peace without sustainable development.”

Hiroshima underwent miraculous post-war reconstruction after World War II, and it epitomizes speed, innovation, technology and efficiency which marks the Japanese character of utter discipline and loyalty to the vision. An architectural and engineering feat of reconstruction.

Today HPC supported by the Ministry of Foreign Affairs of Japan, trains professional peacebuilders to assist war – torn societies and they are doing a remarkable job. I have seen this first hand and I have had the privilege of facilitating two mid-career courses which brings together Japanese and non-Japanese United Nations professionals who work in different conflict affected parts of the world.

The UN Secretary General Mr Antonio Guterres once made a profound remark- “the world is in pieces and we need world peace”. With over 65 million people displaced, due to conflict, instability, climate shocks and sheer degrading poverty, the message from the UN Secretary General is a clarion call to action. Japan has stepped up. In fact, Japan’s pacifist constitution may hold the key to a world free of conflict, violence and instability.

At the HPC, various programmes are being implemented to develop practical knowledge, skills and experience in peacebuilding and development among civilians, an important contribution towards transforming conflict-prone countries into peaceful nations engaged in the pursuit of SDG 16.