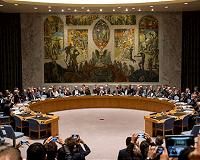 United Nations, United States (AFP) Oct 3, 2019 –
The UN Security Council is expected to hold-closed door talks on North Korea’s test of a sea-launched missile, as European powers push for the world body to keep up the pressure on Pyongyang, diplomats said Thursday.

North Korea claimed to have entered a new phase in its defense capability with the test Wednesday of a submarine-launched ballistic missile — the most provocative since Pyongyang began a dialogue with Washington in 2018.

The demand for closed-door talks was made by Britain, France and Germany, as the United States and North Korea prepare to resume nuclear talks this week. Initially slated for Friday, the talks are now expected to take place early next week due to scheduling constraints, diplomats said.

The European nations consider the test a violation of UN resolutions, and pressed the US delegation to have the council take it up, one diplomat said.

“The Americans do not want a formal meeting” so the Europeans asked for a closed-door session, said another diplomat, also speaking on condition of anonymity.

President Donald Trump, who says he has a great relationship with Kim Jong Un, has shied from criticizing North Korea over its missile tests as the two sides seek an agreement for the North to give up its nuclear weapons.

“We are deeply concerned and we need to bring this back to the Security Council. This is another clear violation of UN Security Council resolutions,” the first diplomat said.

“This test is not neutral, and the Security Council should be able to discuss it,” the second one said.