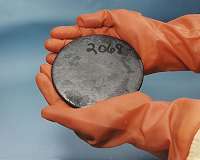 Tehran (AFP) Nov 4, 2019 –
Iran announced Monday a more than tenfold increase in enriched uranium production following a series of steps back from commitments under a 2015 nuclear deal abandoned by the United States.

The Islamic republic has also developed two new advanced centrifuges, one of which is undergoing testing, Ali Akbar Salehi, the head of the Atomic Energy Organisation of Iran, announced.

That compares with the level of 450 grams two months ago.

Tehran decided in May to suspend certain nuclear commitments, a year after US President Donald Trump withdrew from the deal between world powers and Iran and reimposed sanctions on the country.

Tehran has so far hit back with three packages of countermeasures and threatened to go even further if the remaining partners to the deal — Britain, China, France, Germany and Russia — fail to help it circumvent US sanctions.

After the latest announcement, the European Union warned that its support for the nuclear deal depends on Tehran fulfilling its commitments.

“We have continued to urge Iran to reverse such steps without delay and to refrain from other measures that would undermine the nuclear deal,” said Maja Kocijancic, spokeswoman for EU diplomatic chief Federica Mogherini.

Although the EU “remained committed” to the accord, “we have also been consistent in saying that our commitment to the nuclear deal depends on full compliance by Iran”, she told reporters in Brussels.

On July 1, Iran said it had increased its stockpile of enriched uranium to beyond a 300-kilo maximum set by the deal, and a week later, it announced it had exceeded a 3.67-percent cap on the purity of its uranium stocks.