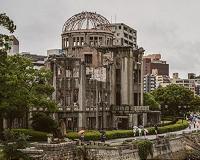 Nagasaki, Japan (AFP) Nov 24, 2019 –
Pope Francis Sunday described the use of nuclear bombs as “a crime”, as he took his appeal for an end to atomic weapons to Hiroshima in an emotional meeting with survivors.

The visit came hours after a highly symbolic stop in the city of Nagasaki, where Francis railed against all nuclear weapons, including their use as a deterrent.

“In barely an instant, everything was devoured by a black hole of destruction and death. From that abyss of silence, we continue even today to hear the cries of those who are no longer,” Francis said at the Peace Memorial in Hiroshima.

“With deep conviction, I wish once more to declare that the use of atomic energy for purposes of war is today, more than ever, a crime not only against the dignity of human beings but against any possible future for our common home,” he added.

He first signed the book of remembrance, saying he would “grieve in solidarity” with the victims, receiving warm applause from the assembled worshippers.

He then clasped hands with several elderly survivors, some of them overcome with emotion on meeting the 82-year-old pontiff and sharing their harrowing testimony.

Francis has made the call for a world without nuclear weapons a central theme of his four-day trip to Japan, starting his visit in two cities synonymous with the horrors of the atomic bomb.

He said he felt a “duty to come here as a pilgrim of peace” and paid tribute to the “strength and dignity” of those who survived the attack and the physical and emotional toll of the aftermath.

Like in Nagasaki earlier on Sunday, he laid a …read more