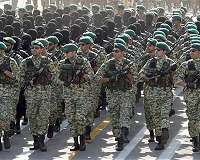 Paris (AFP) Jan 8, 2020 –
Iran’s missile strikes on US troop bases in Iraq were a measured first response to Washington’s assassination of a top commander, but are unlikely to be the last act in what could be a long and asymmetrical revenge campaign, experts say.

With an outpouring of emotion in Iran over the killing of General Qasem Soleimani in an American drone strike, Tehran wanted to appear decisive to calm a clamour for revenge, without provoking President Donald Trump to unleash all-out armed conflict.

“The Iranians are under pressure to do something immediately given the strength of feeling, and that’s where the importance of demonstrating defiance comes in,” John Raine, a geopolitical expert at the International Institute for Strategic Studies in London told AFP.

“What they did not want is to undertake an operation that was dramatically escalatory, at least not now.”

Iran fired missiles from its own soil Wednesday at Iraqi bases housing US troops, in the first act of promised retaliation for Friday’s killing of Soleimani, one of the country’s most important figures.

“With the attacks, Tehran signalled its capacity and readiness to respond to US attacks, thus saving face, and yet they have been well targeted to avoid fatalities and thus avoid provoking Trump’s reaction,” said Annalisa Perteghella of the Institute for International Political Studies in Milan.

While the riposte was unprecedented in being launched from inside Iran by the Iranian state and not a militia, the authorities picked a purely military target using conventional weapons and with no civilian casualties.

“The Iranians have attempted to square the circle (with) a very proportionate attack that is not likely to necessarily provoke the response promised by Trump,” added Francois Heisbourg of the Foundation for Strategic Research in Paris.

“On the Iranian side, this is clearly a signal to stop the escalation process. The …read more