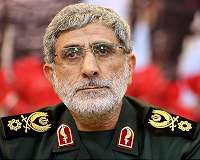 Paris (AFP) Jan 8, 2020 –
Esmail Qaani, the new commander of the shadowy Quds Force of Iran’s Revolutionary Guards after the killing of Qasem Soleimani, represents a continuity choice at a hugely combustible moment for Tehran but lacks the charismatic aura of his storied predecessor.

Qaani, formerly Quds Force deputy commander, was named by supreme leader Ayatollah Ali Khamenei in the immediate aftermath of the killing of Soleimani in an American strike that raised the risk of open conflict with the United States to unprecedented levels.

Appointing Qaani, Khamenei said the “orders remain exactly the same” for the Quds Force, part of the elite Revolutionary Guards and charged notably with its extraterritorial operations — making the force a key player in Iraq, Lebanon, Syria and Yemen.

Like Soleimani, who was hailed in Iran after his death as a martyr, Qaani is a veteran of the grinding 1980-1988 war with Iraq which dominated the early years of the Islamic republic after the ousting of the pro-US shah and still marks its political culture today.

“I think that in the short-(to)-medium term there will be some continuity. We’ll hear a lot of harsh rhetoric, so as to keep awake the message of ‘resistance’,” said Annalisa Perteghella, research fellow at the Italian Institute for International Political Studies (IPSI).

But Qaani does not appear to share the charisma of Soleimani, who made a speciality of openly being photographed with fighters on the frontline and was seen by some as the de-facto number two in the country.

“Qaani does not have Soleimani’s charisma, neither his understanding of the Arab Levant,” said Perteghella. “So there could be changes and adjustments over the long term.”

Following the killing of Soleimani, tensions between Iran and the United States have reached a level unprecedented …read more