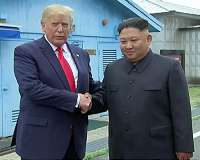 In a sanctions document, the US Treasury has said Kim was born on that day in 1984, which would make him 36, but there is speculation he could be a year or two older.

Seoul’s national security adviser Chung Eui-yong met Trump in Washington on Wednesday and said the former real estate mogul — who in warmer times proclaimed he and Kim had fallen in love — “recalled” it was his birthday.

“President Trump wished Chairman Kim Jong Un a happy birthday and asked President Moon to convey it to him,” Chung told reporters as he arrived back in South Korea on Friday.

The message was delivered “in an appropriate manner”, he added, without explaining how it had been transmitted.

Contacts between the two Koreas are at a standstill, with Pyongyang’s official media repeatedly excoriating the leadership in Seoul.

At a meeting of his ruling party in December, Kim declared an end to Pyongyang’s moratoriums on nuclear and intercontinental ballistic missile tests and threatened a demonstration of a “new strategic weapon” soon.

Trump and Kim have had three meetings since June 2018 but there has been little tangible progress in denuclearising North Korea.

At the 2014 event, Rodman, a heavily tattooed former NBA All-Star, sang the birthday song before the North Korean leader and his wife Ri Sol Ju, as the crowd clapped along.