US tests ICBM as it works to overhaul aging weaponry 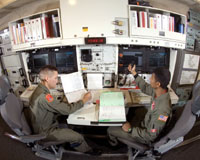 The United States on Wednesday tested an unarmed Minuteman III intercontinental ballistic missile with a new kind of re-entry vehicle as it seeks to modernize aging surface-to-air weapons.

The missile was launched at 0830 GMT from Vandenberg Air Force Base in California, soaring 4,200 miles (6,700 km) across the Pacific to the Kwajalein atoll in the Marshall Islands, the air force said in a statement.

It said it was a “developmental test launch,” not a routine test launch like one carried out on October 2.

“Rather than randomly selecting a fielded ICBM to verify fleet-wide reliability, a Developmental Test Launch uses a spare missile from storage to validate flight worthiness of new or replacement components in an as-near-to operational environment as possible,” the statement said.

“The Minuteman III is aging, and modernization programs such as this are essential in ensuring that our Nation has a reliable nuclear deterrent,” said Colonel Omar Colbert, 576th Flight Test Squadron Commander.

The Minuteman III has been the only surface-to-air missile in the US nuclear arsenal since 2005.

They are kept in launch silos located on three US military bases in Wyoming, North Dakota and Montana.

Trident missiles are deployed aboard US submarines, and US strategic bombers carry nuclear devices, too.

The air force said the test had been planned for months and was not “a response or reaction to world events or regional tensions.”

It came a day after the US announced that for the first time it has deployed a submarine carrying a new long-range missile with a relatively small nuclear warhead.